Mushrooms and Their Incredible Medicinal Benefits

Here at ERCA, we are stocking our shelves with many types of mushrooms. Perhaps you have checked out the fascinating documentary on Netflix called Fantastic Fungi. Watch it, and you will learn about how mushrooms provide communication between trees and aid in their healing.

The Brains of the Forest

Mushrooms are known as the brains or internet of the forest. Mycelia is plural for mycelium, which is the vegetative part of a mushroom that travels underground creating a vast network of fine, feathery white threads under the forest floor. Not surprisingly, humans have been using mushrooms for over 4,000 years. Not only for physical healing but for emotional healing as well. I learned about several varieties when studying Chinese herbs such as reishi and poria, but now, we are learning about species of fungus that have amazing benefits for many common diseases in the industrialized world.

Some of our favorites at ERCA include Lion’s Mane which is used for neurodegenerative conditions such as Parkinson’s Disease. Lion’s Mane has qualities that may protect neurons and nerves in our bodies. The unique neuro-protective effects of these Lion’s Mane compounds are speculated to shield the brain from normal mild cognitive decline associated with aging. Research has found that lion’s mane may protect against dementia, reduce mild symptoms of anxiety and depression and even help repair nerve damage. 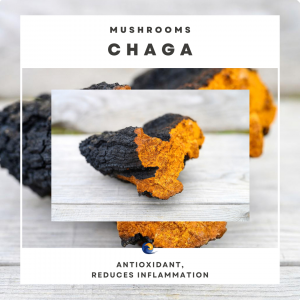 Another favorite of ours is Chaga mushroom which is not a mushroom (fruiting body). It’s a fungus that attaches to birch trees in the Northern Hemisphere. It looks like a clump of dirt and has an orange flesh. Though it’s not pretty, it’s a nutrient dense superfood. It shows potential for preventing and slowing cancer growth. It can lower LDL cholesterol, reduce blood sugar, and lower blood pressure. We are using Chaga for inflammatory diseases and seeing great results. Many enjoy mixing Chaga powder into their morning coffee. 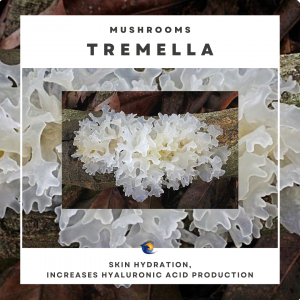 An especially exotic looking mushroom is the Tremella mushroom. It is commonly known as “snow fungus” or the “beauty mushroom.” It has the ability to rejuvenate, moisturize, and hydrate skin naturally. It does this by increasing the production of Hyaluronic Acid which maintains the suppleness and structure of the skin. As we age, the production of HA declines.

Fun fact: Tremella’s water holding capacity is nearly 500x its own weight! Think about its potential to create yin (moisture) to combat the dry environment here in Los Angeles. 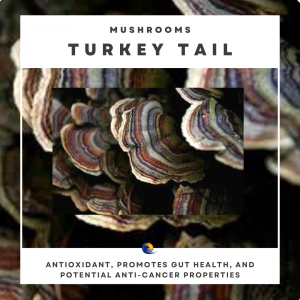 Turkey Tail mushrooms are multicolored fungi that grow on tree trunks and fallen trees in wooded areas. This special digestive enhancing mushroom has prebiotic abilities which balances the gut bacteria and contributes to a healthy immune system. In other exciting news, Turkey tail may be a promising non-toxic therapy to boost immune function, which is typically depressed by chemotherapy and radiation therapy. I first heard of using Turkey Tail for its effectiveness in clearing Human Papilloma Virus (HPV).

We have a variety of mushrooms and products available at the clinic. We’re happy to share what we know at your next appointment.

Stay Ahead of Illness This Season

What Is Seed Cycling?

What is Seed Cycling and How Does It Work? Seed cycling is a food-based approach